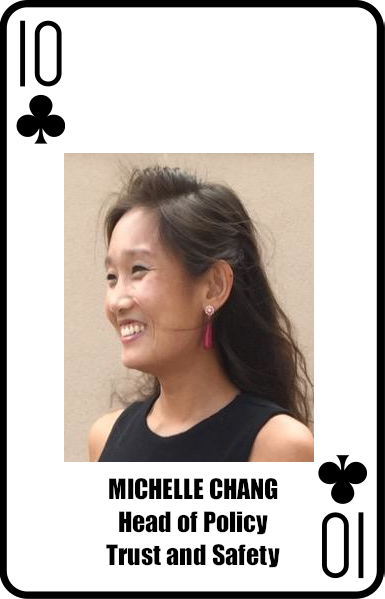 Michelle Lianghui Chang is the name of a high level policy maker in the Trust and Safety department at Google specializing in product policy for Google Search. Today we’re covering her academic and professional history as well as the result of a criminal background check.

According to her LinkedIn profile, Chang studied Chinese at Peking University in China before graduating from Cornell University with a B.S. in industrial and labor relations. Then she earned a Master’s in Public Policy at from U.C. Berkley.

Chang began her professional career as a strategy and human capital consultant at Deloitte in 2004. In 2007 she became a reporter with KQED Public Radio in San Francisco where she covered “Asian and Asian-American political, economic, social, technology, and cultural issues.” In 2010 she became manger of technology programs at the Asia Foundation where she stayed until joining Google in 2015. While at Google she took on a side position with the U.C. Berkley Alumni Board.

Chang describes her past six years at Google as leading a 15 person team of Trust and Safety employees responsible for developing content policies for Google Search. Her description is interesting because it shows that Trust and Safety has a certain amount of control over the search department. Search typically focuses on making search results as good as they can be, but it seems their ability to do that is being crippled by policy people in Trust and Safety.

Chang claims that her policies “underpin Google Search, balancing free expression and user protection from harmful online content.” A better description would be that her policies pin down Google Search by prioritizing the suppression of relevant and useful information for PR purposes over the desire of users to find what they’re looking for. We’ve covered the impact of such polices extensively in our manifesto where we documented just how hard it is to do background checks of people using Google because of policies created by Trust and Safety. In a post promoting a Zoom event featuring Chang, World Affairs claimed that “Her team strives to ensure responsible use of Google Search by forming policies that support access to information that users find is most authoritative, trustworthy, and relevant.” That used to be the case before Google took it upon themselves to tell users what pages they should find most authoritative instead of the pages they really do find authoritative.

Google continued to attack relevance in search earlier this year when they announced manual penalties for sites featuring large quantities of user generated gossip. That was in response to a similar public outcry from people whose most relevant Google results accused them of things like cheating on intimate partners. In most cases Google’s algorithm did a good job concluding that such pages were often the most relevant results for names of people with little to no web presence. Today you have to use Bing or page through large quantities of irrelevant results on Google just to find the same content. Clearly Google cares less about ” forming policies that support access to information that users find is most authoritative, trustworthy, and relevant” than they do about scoring empathy points with bleeding heart liberals in the media.

It is quite common for high value targets to have Google blur the Google Earth image of their home. Usually they do it thinking it will help protect their privacy, but without necessarily realizing that it will help anyone looking for them who knows what they’re doing realize they’re on the right track. Homes that are blurred on Google Earth are far more likely to be inhabited by high value targets than not.

Michelle Chang is a big part of the Google problem. People like her are the reason that Google users are served with less relevant content.