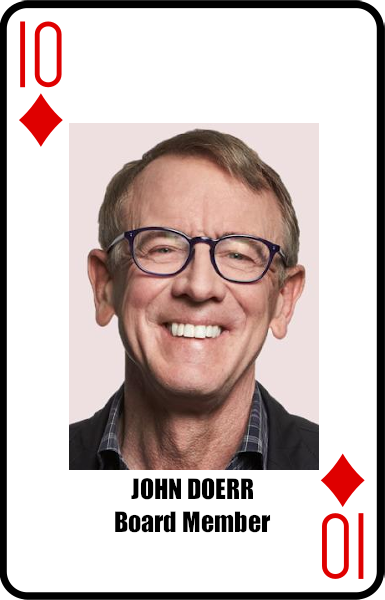 Louis John Doerr is a member of the Board of Directors at Google’s parent company Alphabet. Like many board members he is a mostly retired 70-something known for having a long successful career in the tech industry, but unlike some his wealth and willingness to wield it politically make him a danger to unborn lives and America itself. In this article we will summarize Doerr’s career and conclude with whatever personal information we can dig up.

Doerr began his career working for Intel as a salesman in 1974 after receiving a B.S. in electrical engineering from Rice University. While working at Intel he received a MBA from Harvard in 1976. Doerr left Intel to join Kleiner Perkins in 1980 where he got into venture capital. He spent the rest of his life doing venture capital work for leading tech companies including Compaq, Netscape, Symantec, Sun Microsystems, drugstore.com, Amazon.com, Intuit, Macromedia, and Google.

Doerr has a long history of using his wealth and influence for political purposes that are detrimental to the well being of others. In 2004 he co-chaired California Proposition 71 which legalized stem cell research and in 2013 he founded a lobbying group dedicated to selling out his countrymen to foreigners.

Stem cell research depends on embryonic stem cells harvested from dead babies murdered by abortionists before they are born. Proposition 71 made it a constitutional right under the state constitution of California for people to be able to conduct research on embryonic stem cells. Pro-life activists fought hard against Proposition 71, but lost and now the abortion industry has a quota to fill. The more commercial uses there are for dead babies the more babies will be killed. This has already resulted in abortions becoming more affordable and if that doesn’t produce enough stem cells its only a matter of time until they start paying whores to get abortions. That day will surely be followed by increases in prostitution rates and declines in condom use. Every high school girl in the country will have a new summer job opportunity to put out and get paid. Make no mistake John Doerr has blood on his hands.

FWD.us describes themselves as being created to take advantage of “an important window of opportunity to help fix our country’s harmful immigration system.” That “window of opportunity” was Barack Obama beginning his second term the same year they were founded. The tech industry loves to give American jobs away to aliens, but they have a much harder time doing that as long as those aliens are illegal. Rather than invest in their own people, tech giants have attacked the laws that keep America American. Money that would be better spent on a wall and education for those on the right side of it is instead being wasted in an effort to destroy our country.

Louis John Doerr was born on June 29, 1951 in St. Louis, Missouri to a woman respectable enough not to get an abortion and sell little Johnny’s stem cells to the highest bidder. As a result he is a 70 year old married man with two children thanks to his wife having enough sense and decency not to get abortions.

This baby killer backer has been tied to two notable homes in recent years. We had to do a little bit of digging because like a lot of high value targets he likes to purchase property through companies so that his name does not appear in property records as owning his home.

Most online mentions of Doerr’s home say that he lives in Woodside, California where he hosted a fundraisers for Barack Obama in 2011 and the Democratic Party in 2014. Doerr gave the address 321 Manzanita Way, Woodside, California 94062 when he registered to vote as a Democrat in 2017. His wife made the same mistake, so even thought the owner of the property is listed as Eligius LLC we know it is the same property where Doerr has lived recently.

Our background check service lists his current home address as 601 Coleridge, Avenue, Palo Alto, California 94301-3802, but that service is know to be inaccurate sometimes. The property owner is listed as Coleridge LLC, but Doerr registered to vote at that address in 2007 as a Democrat. Normally we would look at the change in address in the voter registration as an indication that he has moved, but for whatever reason our background check service still links him to that address today.

Despite being a known accessory to the murder of countless unborn babies, we could find no arrests and no charges in his history. Normally we wouldn’t even bother to mention that, but in this case it just proves that he keeps getting away with what should be a crime.

Louis John Doerr is evil and has no business working for a company whose self proclaimed motto is “Don’t be Evil.” Only an evil person supports killing babies and only a traitor supports illegal aliens.