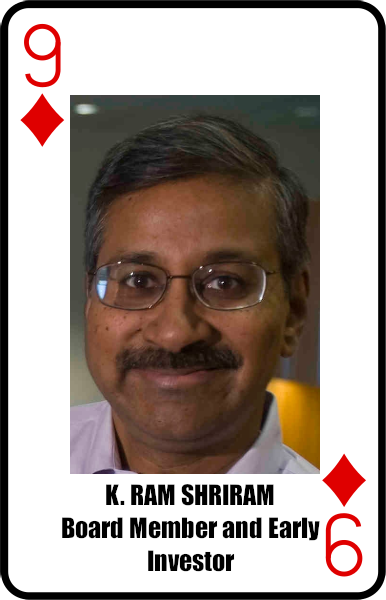 Kavitark Ram Shriram is a board member at Google’s parent company Alphabet. He began his career at Bell Northern Research before becoming Vice President at Netscape in the mid-90s, joined Amazon in 1998, and founded a venture capital firm called Sherpalo in 2000 known for investing in disruptive technologies. One of those disruptive technologies was Google. He has since sold most of his Google stock, but remains on the Board of Directors.

According to Wikipedia, he is originally from Madras, India and an alum of the University of Madras. We are not sure exactly when he came to the United States. We are sure that according to public records he appears to be a 64 year old resident of Woodside, California. We say “appears” because his personal address history does not mention his Woodside address since 2011 with his current address being listed as a P.O. Box in Redwood and the one before that is a business address. However, his wife’s information lists her current address as the Woodside property. That property is located at 580 Mountain Home Road, Woodside, California 94062.

The house above is listed as having been purchased in 2006 for $45,500,000 with a present day assessed value of $32,000,000. The owner is listed as Woodside Investment Partners LLC. It is common for high value targets to purchase property trough a company or a trust in an effort to keep their home address from being linked to them in public records. Fortunately, they often screw up by eventually using that address and their real name in a way that shows up when searching their names.