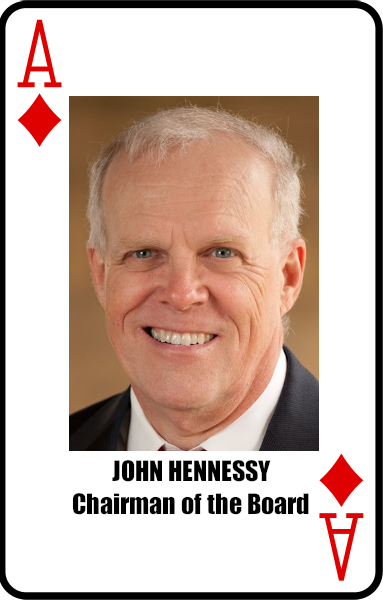 John Leroy Hennessy serves as Chairman of the Board of Directors for Google’s parent company Alphabet Inc. He was nominated to that position due to a lifetime of achievements in the tech industry. As a Board member he plays a minimal yet important role in company operations.

Chairman of the Board

In summary, their job is to make sure that those in charge of running day to day operations are doing their jobs. Our recent expose on Alphabet CEO Sundar Pichai shows that the Board is failing that job. We proved that Pichai has committed perjury multiple times by lying to Congressmen and Senators under oath. We believe that as Chairman of the Board it is Hennessy’s duty to fire Pichai and see too it that the Board implements oversight measures to make sure that Google employees do not engage in activities that according to Pichai’s testimony are “impossible” for them to engage in. We also believe that Hennessy has a duty to shareholders to make sure that Google search results really do show users the “most relevant” results as Pichai’s testimony claimed.

Hennessy was born on September 22, 1952. He is one of six siblings born to an aerospace engineer and a school teacher in Huntington, New York. He has a bachelor’s degree from Villanova University and a master’s degree from Stony Brook University. He is married to his high school sweetheart.

We are not sure exactly where he lives, but we do know that he owns residential properties where he likely spends significant amounts of time. Those properties are in Atherton and Watsonville, California. He has also been tied to a properly in Stanford, California. We have also linked him to a phone number and an email address.

The property at 207 Stockbridge Ave. was purchased for $1,600,000 in 1990 and has an estimated value of nearly $7 million today. The street view isn’t too impressive, but when you zoom out you can see a swimming pool and a tennis court.

The property at 57 Avocet Cir. in Watsonville appears to be a beachfront vacation home. It was purchased in 2020 and is believed to be worth nearly $2.5 million.

The property at 762 Dolores St. in Stanford, California is owned by Stanford University. We believe this to be his residence of choice whenever he has business with the University. It was purchased in 2018 for $3,375,000 and is believed to be worth nearly $5 million today. According to the floor plan it has 4 bedrooms.

We have linked Hennessy to the email address [email protected] Our background check service listed the phone number (516) 775-8355 as likely linked to Hennessy with a confidence score of 5/5.

We conducted a criminal background check and found nothing. No arrests, no charges, absolutely nothing.

John Hennessy has a job to do. He has reached a point in his career when he hardly has to lift a finger unless the person appointed as CEO screws up royally. Lying to Congress is such a screw up.