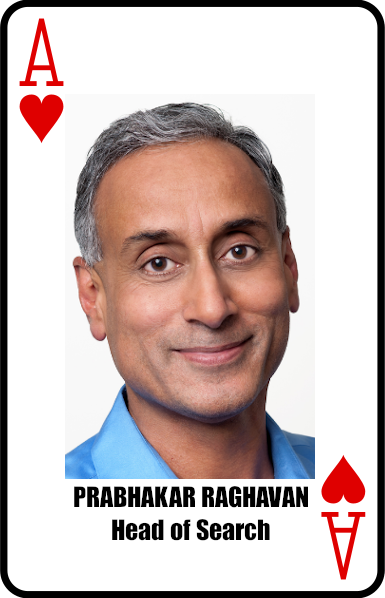 Prabhakar Raghavan is a Senior Vice President charge of Google Search. He is one of 15 executives who report directly to Google CEO Sundar Pichai according to Business Insider. His reports likely informed Pichai that Google employees manually manipulate search results long before Pichai told Congress that it is not possible for them to do so. In this article we will discuss Raghavan’s personal and professional history as well as notable incidents in which his department has sabotaged their core product.

Raghavan was born on September 25, 1960 in India. His mother was a physics and math teacher at a convent in Bhopal. Raghavan himself successfully completed high school in Bhopal before earning a Bachelor of Technology from the Indian Institute of Technology. Sometime after that he move to the United States where he earned a Ph.D. in electrical engineering and computer science from the University of California at Berkley.

Raghavan currently resides at 13636 Deer Trail Ct. in Saratoga, California. The property was purchased in 2004 using a mortgage of $2,063,750. It is believed to be worth just over $4 million today. We found records tying him to other properties, but not in recent years.

We conducted a criminal background check on Raghavan. The extensiveness of his criminal history matches the two other Google employees we’ve run background checks on so far with a total of zero arrests and zero charges.

Raghavan worked at IBM Research for 14 years and was the chief technology officer at Verity before founding Yahoo Labs (see Google bio).

Raghavan joined Yahoo in 2005. At the time Yahoo still operated its own search engine without any help from Bing. Yahoo was desperately trying to stop Google from taking over the search market. The market was very competitive in those days with Google enjoying a narrow lead with about 37% with Yahoo a close second at about 30% and Microsoft’s MSN at about 15%. Back then it still sucked for a site to be manually suppressed or removed from Google, but it wasn’t too big of a deal because most people didn’t use Google. Had Google admitted to manually manipulating search results to our detriment under those circumstances we wouldn’t take it so seriously. Today Google enjoys a dominating market share above 90% with Microsoft’s Bing coming in second at over 5% and Yahoo coming in third at under 3%. Yahoo results are basically the same as Bing results because in 2010 Microsoft took over functional operation of Yahoo Search.

Despite no longer being needed in the search department, Raghavan remained employed by Yahoo until 2012.

Raghavan joined Google in 2012. He worked in the search department as well as on mobile location initiatives before contributing to Gmail, Docs, Drive, and Calendar. In 2018 he became head of Ads and Commerce. In 2020 he became head of search (source: Search Engine Land).

Several notable incidents of sabotage took place during Raghavan’s first stint in search as well as after he took over. We call these incidents sabotage because Google’s Mission Statement says, “Our company mission is to organize the world’s information and make it universally accessible and useful.” These incidents typically involve Google employees in the search department manually manipulating search results to benefit a minority of Google users (ex: people Googling themselves) over the majority of Google users (ex: people Googling others).

As we explained in our manifesto, Google sabotaged search results involving the mugshot industry shortly after Raghavan joined the department in 2013. This was done by tweaking their algorithm to rank mugshot websites lower in search results for people’s names. It began as something that actually improved search quality at first by stopping duplicates of the same mugshot from dominating search results, but it later made search worse by suppressing unique mugshots as well. Today sites like Mugshots.com appear on the first page of Google for searches like “mugshots” and “mugshots online” but rarely rank at all if the search term is the name of a person whose mugshot has been published. Google packaged this sabotage as a public service to stop people from having to pay removal fees, but it persists even though most mugshot sites do not charge removal fees anymore. After states started banning the practice of charging fees to remove mugshots the sites stopped and today the only way to remove a mugshot is usually by getting the record expunged. This is bad for anyone whose charges stick because now they can’t remove their mugshots at all. Today you can still find someone’s mugshot on Google, but you usually have to restrict your search to just mugshot websites. This is bad for Google users because they are no longer being served the most relevant results for a query and as a result the user experience is worse. Now people have to use Bing if they want to find the most relevant information about people.

Although Google packages this sabotage as an algorithm update and not manual manipulation, we believe that it shows a pattern of bias manipulation similar to that Google CEO Sundar Pichai later denied being possible under oath. In this case a group of Google employees decided to demote a specific type of website from being able to rank well or at all for specific types of queries regardless of content quality or relevance. They simply decided that the PR benefits of targeting mugshot websites were somehow worth sabotaging their core product. It is one thing to improve search so that websites are only penalized if their content is inferior or irrelevant to what someone is searching for, but it is another to say that some sites are precluded from having their content quality or relevance considered at all.

In 2015, Google began removing pornographic images upon request if the requester claims that the images are of them and being shared without permission. In 2021, Google admitted that they had also begun using these removals to manipulate search engine rankings for sites known to host them. We are having difficulty figuring out exactly when Google went from just removing images to demoting the sites themselves. Figuring this out is important because if Google began using this process as a demotion tool before Sundar Pichai’s 2018 testimony then it would be the smoking gun needed to prove beyond all doubt that he committed perjury. We already have enough evidence to establish that it was possible for Google employees to manually manipulate search rankings due to the existence of a group of employees called “quality raters” and steps used to suppress images with certain digital fingerprints, but the similarity between the process Google admitted to using recently and the one Pichai told Congress was “impossible” in 2018 is so striking that the implementation date of this process is the information we want more than anything right now.

The process Google admitted to using recently involves maintaining pairs of lists. One list is a list of websites and the other is a list of search terms. If a user searches for a term matching the list of terms then sites matching the list of sites are rank significantly lower. Google admitted that the process has been used for some time to stop adult sites or sites known for hosting revenge porn from ranking well for name searches if the name being searched for matches someone on the “known victims” list. This is the same type of mechanism Google would need to suppress known conservative news sites from ranking well for known Republicans. If Google was using “known victims” or anything similar before Pichai testified that “it is not possible for an individual employee or groups of employees to manipulate our search results” then no reasonable juror could possibly find him not guilty to a charge of perjury.

Even without a smoking gun like Google admitting to using something like “known victims” before 2018, its existence today proves that it was possible for a group of employees in Raghavan’s department to manually manipulate search rankings in such a way. It simply required that a group of them get together and create a manual mechanism for demoting sites. A manual mechanism such as soliciting complaints from the public and manually approving them after which their algorithm uses those manual inputs as a demotion signal.

Google responded to the election of Donald Trump by censoring conservative news sites. This was part of a liberal conspiracy in the tech industry to do all they could to stop him from being re-elected. We discussed Google’s role in this when profiling CEO Sundar Pichai. In that article you can find examples including the time he was called before Congress to answer for it. Most of those changes took place at Google in 2016 and 2017 while Raghavan may have been working in search before moving to Ads and Commerce.

In 2020, Sundar Pichai admitted to censoring far left websites in some cases. His admission appeared to be an attempt to appear less bias by admitting to wrongfully censoring people on both sides of the isle. One victim named by Pichai was the World Socialist Web Site. However Google seems to limit its censorship of the left to the bare minimum necessary to make a plausible claim of being non-bias. If Google were truly non-bias they would not be censoring anyone.

In 2021, Google admitted to expanding the “known victims” concept previously used in revenge porn to other industries. Specifically, sites that allow users to remove content for a fee. This was covered in depth when profiling CEO Sundar Pichai. It was the kind of thing we had suspected Google of doing for some time, but not something we ever expected to admit to due largely to prior statements under oath that it was not possible for Google employees to do such a thing. Until then the concept of “known victims” had not been explained publicly. We knew that Google had been removing content from search and suspected them of using that as a demotion signal, but because admitting to doing so would also be an admission to making false claims we never expected them to own up to it. It appears that someone at Google either did not realize they would be perjuring their CEO or realized that the recent regime change in the United States would likely allow them to get away with it and feared the PR damage that would result if they did not admit publicly to the “known victims” system.

Raghavan or people in his department have been manually manipulating search for years. We feel Google users would be better served by a warning system like the one we propose in our manifesto that would advise users as to the veracity of information without denying them access to information.