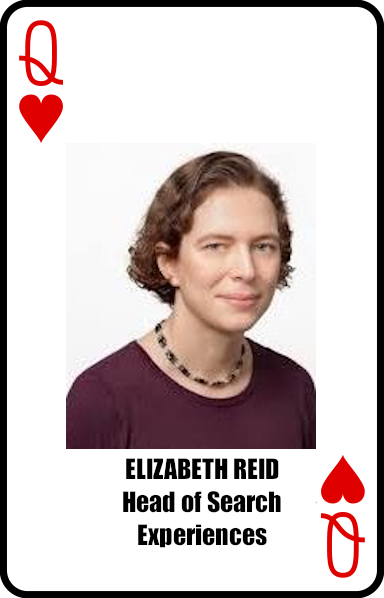 Elizabeth Hamon Reid is head of search experiences at Google. As such it is her job to make sure that most Google users find what they are looking for. She is failing miserably at that job. Just a few years ago, Google was a great place to find what you are looking for, but now its more like they are telling you what you should be looking for. In this article we will cover what we know about Reid and how she needs to steer her company in the right direction.

Before moving to the above mentioned address she lived in an apartment briefly after living in New York for many years. She had moved to New York from New Hampshire to become the first female engineer at Google’s New York office in 2003. After moving to California she became lead of Google Maps for several years before being appointed to her current position overseeing search experiences including image search (source: Search Engine Land).

What She Needs to Do

Google’s mission “is to organize the world’s information and make it universally accessible and useful.” Only by truly accomplishing that mission can Google users hope to find what they’re looking for on Google. As The New York Times recently pointed out, just a few years ago you could find just about anything on Google, but that is not so anymore because of human meddling. That meddling sets a dangerous precedent.

When Google allowed their algorithm to impartially rank pages based on quality they earned their dominant position in the market by being the best at connecting people with the information they were looking for. People could Google the name of a business or a person and trust that Google would serve them with the most relevant results. Often the most relevant results were damaging to reputations. Those results contained things like police mugshots, negative business reviews, and dirty details of people’s personal lives. The kinds of things hiring managers, prospective customers, and potential romantic partners want to know. It was a golden era for the free flow of information thanks in large part to Google.

Today you’re not likely to find nearly as much information on Google when researching people or businesses because of censorship. Most people mark the beginning of this era after the 2016 election of Donald Trump when big tech decided to do all they could to influence the next election, but this era really began a few years earlier. When Google began suppressing police mugshots in search results and removing pornography if any party in it claimed that the disclosure was not consensual. Google claimed that these changes were necessary to improve the quality of their search results, but that was clearly a lie. Users are never better served if they must restrict their search to mugshot websites just to see if someone has a criminal history and even then still find filtered results whenever Google has a policy of removing certain things upon request. The end result is users misled into thinking there is nothing wrong with the person or business they are researching when in fact the web is full of negative articles. People often must got to Bing to find what is really out there.

Why is this? Because Google now prioritizes claims of emotional distress from a minority of users (people Googling themselves) over the majority of users (people Googling others). People complained that Google results for their name were full of false accusations that misled people. Often those people had no proof that the allegations were false, but Google chose to treat them just the same. Its as if they decided that stopping one person from experiencing emotional distress while Googling themselves is more important than two people being able to find what they’re looking for. We spoke to one such person who was the victim of a serial libeler named Nadire Atas. He blamed the webmasters whose sites she abused for her conduct. We argued that people often want to find information such as the articles she posted when Googling people to which he said, “nobody wants or is setting out to find defamatory lies about me,” He has a point, people probably are not specifically looking for negative articles when they Google him. However, they’re often more open minded and curious to see anything that comes up about him whether its positive, negative, true, or false.

“If anyone is Googling me, it’s to find accurate, truthful stuff about me. The bullshit you put out there just gets in the way of that . There is nothing worthwhile or useful about it whatsoever. People don’t actively and consciously go on Google to try to find lies and bullshit. And nobody gains anything from knowing that I have a cyber stalker. It’s not going to affect anyone else other than me.“

The problem with his opinion is that people benefit greatly from knowing that he has a cyber stalker, especially in a case where the stalker targets anyone associated with her targets as well as the targets themselves. Knowing that he has such a dysfunctional person in his life is important for people to consider before publicly associating themselves with him. They might want to make sure that they don’t advertise their relationship so that Atas won’t find out. In less severe cases people still learn something important about the person. That the person has enemies for some reason. They might not “consciously go on Google to try to find lies and bullshit,” but they are curious should they encounter lies and bullshit. We removed all of Atas’ work from our sites when we discovered proof it was false, but most are not so clear. Usually we have no way of knowing if an author is telling the truth. Google users are typically open minded when Googling a name and are curious to see whatever shows up whether its positive, negative, true, or false. Since likely lies are relevant to the query they should not be buried behind irrelevant results. They should be restored to their rightful place below quality relevant content and above irrelevant content.

It is not Google’s place to decide what we should be looking for. Their place is to help us find what we’re looking for and anything else relevant to our searches. Its like they seized control over the internet’s information funnel by fulfilling their mission so that later they could use it to control what we see. The latter is an un-American threat to our way of life. It requires that they forego revenues from future searches and incur unnecessary labor costs removing content. Such anti-capitalist decisions appear to be influenced by Marxist philosophies. They are deciding what is true or false based on criteria other than facts such whether content can be removed for a fee (ex: negative reviews) or being too useful in an allegedly negative way (ex: mugshots). Google is now nothing more than a white washed version of the internet. They can only continue with this so long before Google is no longer a reliable source of information. Ironic since they claim their changes are supposed to improve the accuracy of search results.

The warning label system we proposed in our manifesto is an ideal alternative. We ask that Google add labels to potentially misleading results so that users can make better decisions without being denied access to relevant information.