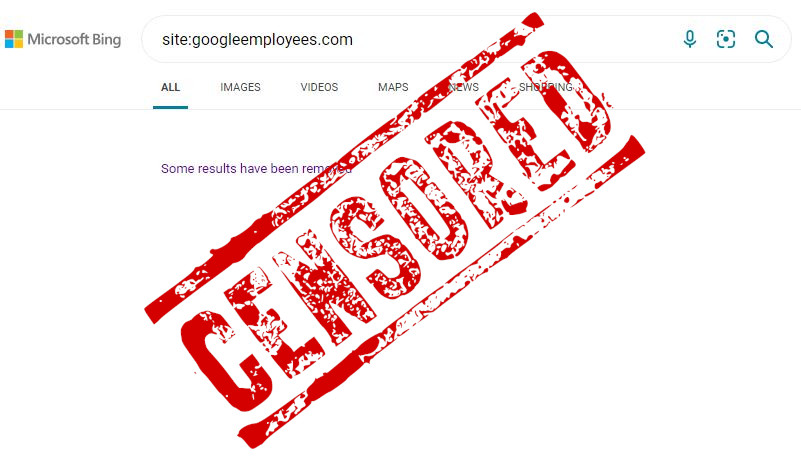 Microsoft has banned GoogleEmployees.com from their Bing search engine which means that our domain will not appear on any Bing powered search engine including Yahoo and DuckDuckGo. This came not long after we noticed that our home page ranked number 2 on Bing for the search term “Google employees.” We appealed to Bing and the responses we received were evasive. Those evasive responses combined with the fact that our site was replaced with a removal notice indicate that Microsoft employees manually removed our site and decided it will not allowed back in.

Our site was quickly indexed by Bing when it was nothing more than a single page with no real formatting whatsoever. It featured nothing more than our logo, pictures of two Google employees, a brief explanation of our grievances, and a disclaimer for our logo. Despite that it climbed to number 2 on Bing for the search term “Google employees” based on the domain name being an exact match. Then all of a sudden it was gone. We sent a message to Bing asking why and they said it was not adhering to their quality guidelines, so we figured we would try again after we had a real site up with some good original content. After we did that we resubmitted an appeal to Bing, but got no response. Then last week we did a Bing search for site:googleemployees.com only to find no results and a notice from Bing saying, “some results have been removed.”

Bing only displays the “some results have been removed” notice when their staff have manually removed something. This is evident by the fact that the notice itself is a link to a list of reasons why results are sometimes removed. Among those reasons are legal requests for things like copyright infringement, libel, hate speech, and sensitive personal information. We know that our site does not qualify as copyright infringement or libel because our use of Google’s images are protected under the fair use clause of the copyright act and everything we say is true. That leaves us with hate speech and sensitive personal information. Microsoft appears to define hate speech in the traditional sense, so we don’t think that is the reason even though we clearly hate Google. That leaves the most likely culprit being sensitive personal information including home addresses, personal phone numbers, and personal email addresses.

From time to time, webpages that are publicly available will intentionally or inadvertently contain sensitive personal information posted without the consent of the individual identified or in circumstances that create security or privacy risks. Examples include inadvertent posting of private records, private phone numbers, identification numbers and the like, or intentionally and maliciously posting email passwords, login credentials, credit card numbers, or other data intended to be used for fraud or hacking. Upon verification, Bing will remove such search results.

However, our conduct does not meet this definition because we don’t “inadvertently” post “private phone numbers … and the like,” we post them on purpose. We do not however post anything under the intentional clause of their policy. Unfortunately, we have learned that tech companies love to do what they wish regardless of what their policies technically say and they can get away with it due to catch all clauses. That is one reason why they often give nothing but vague responses to appeals if they respond at all.

After we noticed the removal notice in Bing results we immediately contacted Bing to make sure they knew they made a mistake. After all they appeared to have removed the result when it was just a single page ranking high due to its domain name alone. Bing has had a habit of deindexing sites manually in recent years when they realize their algorithm is not sophisticated enough to keep them from ranking higher than they think they should. We had hoped that they would realize that it is now a fully functional website that does not violate any of their quality guidelines.

We quickly received a response from Shailaja Vanam which sounded like they were trying to fix the problem.

As you can see we had every reason to be optimistic, especially after reviewing the Bing Webmaster Guidelines. As people who’ve worked in web development and SEO for awhile we know that a WordPress site full of original content does not violate the quality guidelines of any search engine. The “Things to Avoid” section that Vanam emphasized is full of stuff black hat SEOs do to trick search engines like cloaking, link schemes, social media schemes, duplicate content, scraped content, keyword stuffing, automatically generated content, affiliate programs, misleading structured data, and malicious behavior. The only possible items from that list that one could try to inaccurately apply to us would be keyword stuffing, misleading structured data, and malicious behavior. We don’t engage in keyword stuffing, but one might try to argue that by calling ourselves Google employees that we stuffed the site with keywords that could mislead Bing bot into thinking we actually are Google employees, but that is not an accurate classification because our site is about Google employees and that name described our topic accurately. Likewise our structured data is not misleading for the same reason being that the name Google Employees is not misleading. That leaves us with malicious behavior which Bing defines as, “phishing or installing viruses, trojans, or other badware.” Clearly we don’t engage in malicious behavior.

We wrote back to Bing explaining why our site did not deserve to be kicked out of Bing. Our message was as follows:

We thought that Google may have submitted a trademark infringement complaint to Bing alleging domain squatting, so we thought our best option would be to provide proof that we have a First Amendment right to registers a TLD for the purpose of creating a gripe site about Google. Absent a different explanation from Bing that seemed like the most logical reason for them to remove the site. We also pointed out that all of the personal information was from public records, so technically we did not post any private information.

Vanam responded with a vaguely worded claim that upon further review they determined it does not meet their Webmaster Guidelines, but refuse to say why that is. He just said, “We are not able to provide specifics for these types of issues because the relevant teams do not share reports with us.”

As you can see this boilerplate response is intentionally vague. Obviously they don’t want to fan the flames further by admitting the real reason for censoring us. That they received a complaint from Google and chose to aid them.

Why Would Bing Want to Help Google?

We don’t know for certain, but we do have theories. Theories regarding Microsoft’s legal policies with regards to direct competitors and personal relationships with Google employees.

We suspect that the legal department at Microsoft has certain policies that treat Google better than other people. The policies are likely motivated by the fact that they are direct competitors and don’t want to be accused of commercial disparagement by allowing people to disseminate negative information about the company via their platforms. However, Microsoft is protected from legal liability for our statements under Section 230 of the Communications Decency Act, so they are under no legal obligation to help Google. Still, they likely do not want to appear supportive of disparaging acts directed at Google just the same. Perhaps they are hoping or have already engaged in a quid pro quo with Google when people have disparaged Microsoft. That is one theory, but we think personal relationships are a more likely explanation.

Google has a long history of hiring former Microsoft employees and vise versa. Two notable examples include the 2019 hiring of a former Microsoft executive to run G-suite and the 2014 hiring of a former Google executive as Microsoft’s chief economist. When we were banned from Pinterest we quickly learned that the CEO of Pinterest is a former Google employee. We suspect that someone at Google reached out to him asking for a favor and that is why his platform was so quick to ban us even though all we posted were copies of images with links to our articles. We suspect that one of the many former Microsoft employees working at Google reached out to their former co-workers asking for help.

Hope is Not Lost

We have learned over the years that it is really easy to get content back into search engines after it has been manually removed. Usually it just requires a URL change, but usually we are only dealing with individual pages being removed and not a domain wide ban. Still, the same principle applies. We simply need to make our content available to Bing at different locations because Bing bot is not sophisticated enough to recognize it as previously banned material. This is already becoming evident because some of our material has found its way into Bing search results. In those cases we simply syndicated parts of articles elsewhere with links pointing back to our site. Bing bot does not see anything wrong with the content because it is not in violation of Bing’s Webmaster Guidelines, so it has indexed it. It does not rank as well for search terms including the name Google as this site did, but people can still find it easily. If Bing manually removed those results or the sites hosting them suspends our accounts we simply need to make sure that the content is syndicated more.

Bing is wasting their time trying to help Google. They can make a small difference, but at the end of the day our content will still be indexed by Bing.