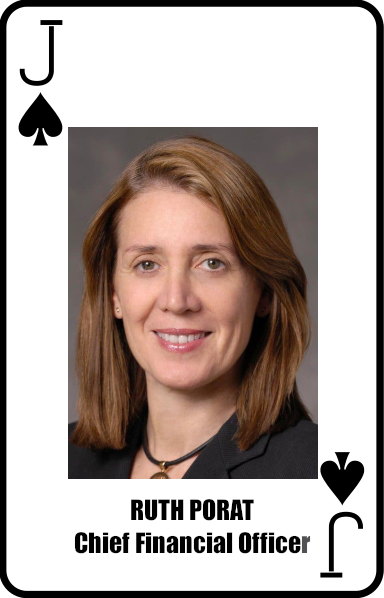 Ruth Porat is the Chief Financial Officer (CFO) at Google. As CFO she should be well aware of all the money Google is wasting on censorship. We can only image how many people it must take to manually sculpt search results to fit their ideology. In this article we will discuss Porat’s history, what is expected of a CFO, and how she has failed the common shareholder.

Porat rose to prominence at Morgan Stanley where she is credited with a long list of accomplishments on Wikipedia. Those accomplishments led Barack Obama to consider naming her Deputy Secretary of the Treasure in 2013, but she asked for her name to be withdrawn.

Porat has long ties to leaders in the Democratic party. In 2008 she hosted a fundraiser for Hillary Clinton’s campaign at her apartment (see Washington Post). She became well know for being outspoken with her far-left views.

Google hired Porat as their CFO in 2015. She was quickly credited with saving the company money and increasing their stock value by reorganizing the company and imposing financial discipline. Unfortunately, she did not teach them to remember how they got where they are today and not to engage in contradictory behavior. However, Google was still pretty free speech friendly back then.

In 2016, Porat hosted another fundraiser for Hillary Clinton and later broke down in tears when Trump won. Her reaction explains why someone in her position would encourage or at least sit idly by while her co-workers began wasting money by paying staff to manually manipulate search results.

As you can see, she became quite disturbed by the results of the election. She broke down in tears and described felling like she had been kicked in the gut. Anyone that reacts that badly to an election cannot be expected to behave rationally in the next election. She was not alone in her overreaction, as the video below shows many of her fellow executives reacted similarly.

That video was shot right after Trump won the 2016 election. We think that was the turning point when Google decided to get more politically involved by manipulation the kinds of information available to the public via their platform. We already have evidence of them manually manipulating search results years earlier, but after Trump got elected they obviously seemed regretful for not doing it more and were determined to pull out all the stops.

Ruth Porat can be seen in the video at 12:30 saying exactly what she said in the first video, but before that Chief Legal Officer Kent Walker asks at 7:23 “what can we do to reach out to people whose perspective we have a hard time understanding?” We think the answer to that question is manual suppression of search results. Rather than reaching out and trying to change people’s minds, Google went on a crusade to suppress their voices before they could convince others to join them. They began abusing their position to impose a Stalinist curtain of censorship over search packaged as “a solution to this problem” like Walker said was needed at 10:40. There is a back and forth between Sundar Pichai and the audience starting at about 27:00 which seems like a good indicator of Google’s intention to use their position as gatekeepers of the web to lock people out of places.

Not long after this video was shot people began noticing that conservative news sites suffered sudden unexplained drops in search visibility. It was like someone at Google flipped a switch. Google of course lied to the public and even Congress claiming there is no manual manipulation (see our article on Sundar Pichai). Then they admitted to manually manipulating search results in the same manner on different issues (see our article on Pandu Nayak). Those other issues included us which is why this website was built. Google took over the search engine market by gaining the public’s trust as a reliable place for people to find what they were looking for. After gaining that trust, Google decided to tell the public what they should or should not be looking for. That is where they crossed the line.

Ruth Porat was born to a Jewish family in the United Kingdom in 1957 making her 64 years old. Her parents moved her to Cambridge, Massachusetts when she was a young child. She has been married to a prominent lawyer since 1983. She has degrees from Stanford University, the London School of Economics, and Stanford University.

Investopedia owns to Google featured snippet for the search term “cfo job description” so we will use Investopedia’s definition to prevent Google from accusing us of using an inaccurate definition down.

A chief financial officer (CFO) is the senior executive responsible for managing the financial actions of a company. The CFO’s duties include tracking cash flow and financial planning as well as analyzing the company’s financial strengths and weaknesses and proposing corrective actions.

Porat has performed those duties quite well overall. So well in fact that we don’t expect any of the shortcomings we point out here to be so significant as to outweigh the overall benefit Google has received by employing her in this capacity. However, we feel that the shortcoming are still shortcomings that someone in her position obviously feels entitled to allow. Those shortcomings include a failure to take corrective action in response to unnecessary labor expenses that diminish the value of their core service. Specifically, the hiring of employees to remove content from search results that they are not required to remove by law and manually manipulate rankings.

Members of the Google high command such as Porat have already made so much money that have the luxury of not having to worry about money. The same cannot be said of common people that own small amounts of Alphabet stock. Those are the people that Porat has an obligation to, so when people like her think to themselves that they’ve got plenty of money and can easily afford to waste it for some societal purposes common shareholders suffer most. Porat’s life wouldn’t change a bit if Alphabet stock price takes a hit or just doesn’t grow as much as it could.

Ruth Porat is a major part of the Google problem due to her failure to stop the company from wasting money on content removal and suppression.