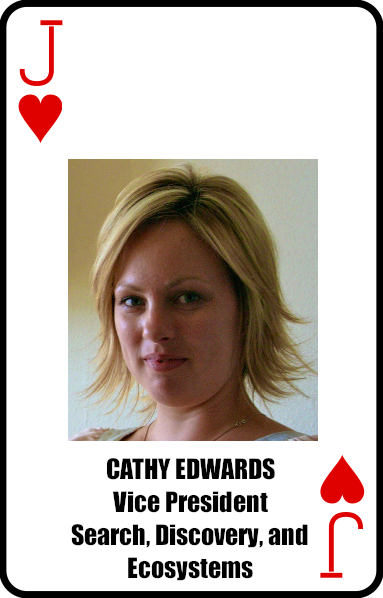 Catherine A. Edwards is an engineering vice president at Google who was head of image search and user trust for search as recently as last year. Today she leads Google Apps, Google News, and other efforts. In this article we will discuss her professional career and personal information.

Edwards made a name for herself in the tech industry as co-founder of Chomp before becoming an Apple engineer, founding Undecidable Labs, and eventually joining Google.

Edwards co-founded Chomp with Ben Keighran in 2009. Chomp was a search engine for apps. It used advance algorithms to figure out what apps users were looking for and serve them the most relevant apps. It was basically a Google for apps. Apple bought Chomp in 2012 and shut it down.

Edwards went to work for Apple when they acquired Chomp. She was put in charge of fixing Apple Maps. At the time Apple Maps had been so inaccurate that the following year Apple CEO Tim Cook publicly apologized and recommended that people use Google Maps instead. Edwards took credit for improving Apple Maps, but despite that left the company in 2014.

In 2019 Edwards was awarded the title “VP of Engineering” according to her LinkedIn profile. The following year she began appearing in propaganda videos put out by Google and Google Australia via YouTube under the title “VP, Search” with narrators describing her as “head of user trust for search.”

In the above video about fighting spam, the narrator describes Edwards’ job, “head of user trust for search, which basically means she deals with a lot of crap so the rest of us never have to.” Edwards described web spam as “a low quality page which is artificially boosted in our results” and the narrator lists several examples such as AI generated nonsense text, hidden text, and URL hijacking intended to trick their way into people’s search results. While their list was not exhaustive we noticed that none of their examples include anything relevant to us. The narrator described “the kind of websites that when you end up on them you hit the back button as quickly as possible.” None of our websites fell into that category either. In fact, the most recent data from Google Analytics for the two sites manually penalized by Google for which we created this website in protest indicates that their bounce rates have gone up slightly since being penalized. If Google’s manual action was intended to improve the user experience by eliminating low quality or less relevant results the numbers sure don’t show it. When comparing our first site’s organic search traffic from its best month ever several years ago we noticed that our bounce rate was 10% less back then even though we received over 70,000 more visitors from Google. Those numbers overwhelmingly support the conclusion that Google’s manual suppression of our content has done far more to deny users access to relevant and useful information than it has to protect users from “harmful” content. That is especially true when “harmful” is defined as containing allegedly false accusations against people and the basis for the suppression is an option to purchase noindex tags. If Google’s actions made search better our bounce rate would have dropped.

Google has been treating our content like spam just because the minority of users that authors are talking about have been extremely vocal as of late and the press has been taking notice. Rather than defend search results full of allegedly false allegations against people as the most relevant and useful results for the majority of people searching for those subjects, which they are, Google has been suppressing the information. This forces users to sift through several pages of irrelevant results to find our content. Nothing about that is consistent with the primary goal of Google which is “to organize the world’s information and make it universally accessible and useful.” None of our results were artificially inflated. We simply made sure that our page markup clearly identified subjects so that search engines could easily understand what they were about. That led to higher rankings, but those rankings were organic and not inflated.

Google has been treating our content like false information even thought our disclaimers clearly make every page on every site of ours 100% true as accurate quotations of others even if those quotations contain false statements. To say “someone said” followed by an accurate quotation of their words will always be a true account of their statements. Numbers overwhelmingly show that more people are interested in learning what others have said on such topics even if those statements contain false information. Even when an author lies the fact that their topic has at least one enemy willing to attack their reputation online is still useful information for people searching about them. We can think of many cases where better content should be outranking ours on Google because it is from sources more reliable than our users, but our content should still rank higher than content Google knows to have nothing to do with the subject.

At about 21:35 in the video below, Edwards talks about the importance of making search useful for journalists. She described “uncovering information” as one of the most important parts of their work which is why Google has been using AI to save them time. Edwards says, “for those of you who are not journalists, try to imagine how much time and effort it can take to sift through everything,” thanks to Google’s new manual removal and suppression of information they don’t have to. All they need to do is Google anyone whose name has been featured on either of our sites which Google attacked. Now anyone looking for anything about those people must sift through pages and pages of Google search results that have nothing to do with them just to find what was and should still be on the first page.

It is unfortunate that the Google Pinpoint tool for journalists mentioned in the above video has not been expanded to search in general. Right now it only involves selected collections of government documents which can be searched for names of people, places, and people in places. Those are the exact types of web searches that Google penalized our sites in and we think using Pinpoint’s UI to search the Google search engine would be great if Google stops suppressing content for reasons irrelevant to relevancy or quality. We would also like to see Google do away with Pinpoint’s application process because something so easy to use that a journalist can use it should be accessible to everyone.

According to Search Engine Land she was made lead of Google Apps, Google News, and “other ecosystem efforts” in April of 2021. As far as we know she remains at that position. Even though she is not technically in charge of image search or user trust for search as far as we know, she is none the less a member of the Google team with great influence over search which is why she is our jack of hearts.

Cathy Edwards was born and raised in Australia which can make finding her information slightly more difficult because other countries do not have the types of openly accessible online public records that we do. Fortunately, she moved to the United States during the mid-2000s and created a paper trail that we believe to have located.

The last known home address that we found for Cathy Edwards is 300 Ivy Street, Apartment 102, San Francisco, California 94102. That address is in the heart of San Francisco just blocks from notable downtown buildings. It was purchased in 2014 for $1,167,000.

We found the above address after doing a background search on phone numbers listed under her name on SignalHire. There are a lot of people in California named Cathy Edwards, so we were having difficulty finding her in part because we could not find any mentions of her exact age in the media. Three of the mobile numbers from SignalHire appear to belong to other people also named Cathy Edwards, but number 650-492-1397 belongs to a female in San Francisco whose address history only dates back to 2007 when Edwards was a product manager at 3Jam Inc. in Menlo Park. The same record lists Undecidable Labs as a possible employer and corporate affiliation. Other online information indicates that Edwards used that address to register Undecidable Labs with the California Secretary of State, but that it is also a residential address. We believe that Edwards ran Undecidable Labs out of her home.

We’ve also linked her to the email address [email protected] which we believe she used to create her Twitter and/or LinkedIn accounts.

Cathy Edwards has played a huge role in the search department at Google as recently as this year and continues to work in a highly influential capacity which places her near the heart of the Google problem.